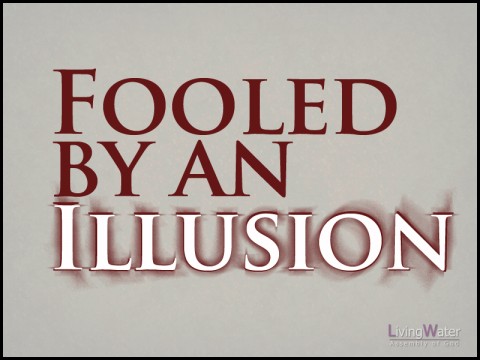 Romans 12:18, If it is possible, as much as depends on you, live peaceably with all men. Have you ever had a window in your house that was repeatedly attacked by a bird of some kind?  The bird will perch itself at the base of the window, ruffle its feathers, chirp loudly, and then fly headfirst into the glass.  After some research I found that birds are territorial.  While nesting they drive out competing birds.  These birds apparently see their reflection in the window and think it is another bird.  The threat is not real, it is only an illusion.

In the Old Testament, we see an instance when Jacob imagined a threat that wasn’t really there.  Years earlier, Jacob had stolen his brother Esau’s birthright and the blessing from their father, so in his mind he could justify his thinking—even if his thinking was wrong.  Now, after many years of separation, the estranged brothers were going to meet again.

Jacob thought Esau would harm him, so he sent ahead a peace offering of sorts.  Then, when he saw Esau approaching with 400 men, Jacob panicked.

Genesis 33:1-3, Now Jacob lifted his eyes and looked, and there, Esau was coming, and with him were four hundred men. So he divided the children among Leah, Rachel, and the two maidservants. 2 And he put the maidservants and their children in front, Leah and her children behind, and Rachel and Joseph last. 3 Then he crossed over before them and bowed himself to the ground seven times, until he came near to his brother.

In the Old Testament, the act of bowing was the customary act performed by an individual before a person in a superior position. The Hebrew verb translated “bow down” can be translated “to worship.” Bowing down was a gesture of respect before and act of submission to superiors, persons in authority, government officials, and God.  Seven being a perfect number, could mean that Jacob could have been symbolizing a request for perfect forgiveness.

Now, let’s go back to Genesis 33 and pick up at verse 4, But Esau ran to meet him, and embraced him, and fell on his neck and kissed him, and they wept. So what Jacob thought was an attack force turned out to be a welcoming committee.

In interpersonal relationships, we sometimes misinterpret a situation.  We must ask the Lord for discernment so we don’t miss a friendship or opportunity because of an imaginary threat.

Zig Ziglar said, “Stop being afraid of what could be wrong, and start being positive about what could go right.”

I came across a poem this week:

I went outside to find a friend

But could not find one there;

I went outside to be a friend,

And friends were everywhere! —Payne

Think of the things we don’t do because of what we think might go wrong—the people we haven’t shared the Gospel with because of fear.

For Jesus the threat was real, and He did it anyway. Hebrews 12:1-2, Therefore we also, since we are surrounded by so great a cloud of witnesses, let us lay aside every weight, and the sin which so easily ensnares us, and let us run with endurance the race that is set before us, 2 looking unto Jesus, the author and finisher of our faith, who for the joy that was set before Him endured the cross, despising the shame, and has sat down at the right hand of the throne of God.

Don’t be afraid of a presumed enemy, but trust in the Lord. Matthew 19:26, But Jesus looked at them and said to them, “With men this is impossible, but with God all things are possible.”

Find them on our media page.

Has God blessed you through our online ministry?

We would like to give you the opportunity to help our ministry grow.