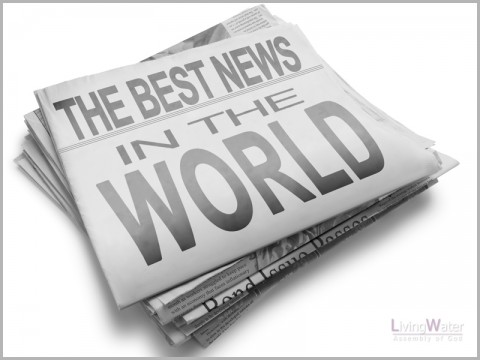 People tend to remember negative images more than they do positive ones, according to an experiment conducted at the University of Chicago.  While people claim that they want to turn away from the barrage of bad news in the media—reports on tragedies, diseases, economic downturns—this study suggests that their minds are drawn to the stories.

This is the way Paul said it in Romans 12:2, And do not be conformed to this world, but be transformed by the renewing of your mind, that you may prove what is that good and acceptable and perfect will of God.

We are instructed in the bible to go into all the world and tell the story of hope.  We should never tire of hearing or telling the story.  Because of His great love God sent His one and only son to this earth.  John 3:16,  For God so loved the world that He gave His only begotten Son, that whoever believes in Him should not perish but have everlasting life. When we receive Christ as our Savior, we are given eternal life and become His children.  John 1:12, But as many as received Him, to them He gave the right to become children of God, to those who believe in His name:  Jesus lived a perfect life, took our sin upon Himself when He was crucified, and three days later rose again.

Luke 23:44-24:3, 44 Now it was about the sixth hour, and there was darkness over all the earth until the ninth hour.  45 Then the sun was darkened, and the veil of the temple was torn in two.  46 And when Jesus had cried out with a loud voice, He said, “Father, ‘into Your hands I commit My spirit.’” Having said this, He breathed His last.

47 So when the centurion saw what had happened, he glorified God, saying, “Certainly this was a righteous Man!”

48 And the whole crowd who came together to that sight, seeing what had been done, beat their breasts and returned.  49 But all His acquaintances, and the women who followed Him from Galilee, stood at a distance, watching these things.

50 Now behold, there was a man named Joseph, a council member, a good and just man.  51 He had not consented to their decision and deed. He was from Arimathea, a city of the Jews, who himself was also waiting for the kingdom of God.  52 This man went to Pilate and asked for the body of Jesus.  53 Then he took it down, wrapped it in linen, and laid it in a tomb that was hewn out of the rock, where no one had ever lain before.  54 That day was the Preparation, and the Sabbath drew near.

55 And the women who had come with Him from Galilee followed after, and they observed the tomb and how His body was laid.

56 Then they returned and prepared spices and fragrant oils. And they rested on the Sabbath according to the commandment.

Chapter 24:1 Now on the first day of the week, very early in the morning, they, and certain other women with them, came to the tomb bringing the spices which they had prepared.  2 But they found the stone rolled away from the tomb.  3 Then they went in and did not find the body of the Lord Jesus.  4 And it happened, as they were greatly perplexed about this, that behold, two men stood by them in shining garments.  5 Then, as they were afraid and bowed their faces to the earth, they said to them, “Why do you seek the living among the dead?  6 He is not here, but is risen!

When was the last time you told the story;  the old, old story of Jesus and His love.  We all need some good news.

Carefully consider the people in your life who you could give concentrated effort in the attempt to bring them to the next step in knowing Christ.  Make a list of these people and begin to pray for the people on your list.  Ask God to work in their lives and to give you the wisdom on how to effectively reach out to them.

We have the best news in the world for people—don’t be afraid to share it!!

Find them on our media page.

Has God blessed you through our online ministry?

We would like to give you the opportunity to help our ministry grow.